Architects of Our Own Future

It was November 2, 2011. I could feel the energy almost crackling in the air. The Occupy Wall Street movement had just burst onto the political scene, bringing the question of wealth inequality right into the mainstream.

The walk with the Oakland march from downtown to the Port was a magical moment. The kids’ contingent defended their bright dreams of a better future, paleta vendors spontaneously joined the march, labor leaders and community activists debated the economic foundation of capitalism! I could almost see the world where everyone has enough, where we honor the leadership and power of our people to care for each other, shimmering between the demonstrators like the air above asphalt on a hot day.

That year, like architects at a drafting table, community and organizational leaders from around the Bay Area were already beginning to dream together of the formation of Bay Rising. I had the great fortune to be part of this process, working alongside  Jessamyn Sabbag, Alex Tom, NTanya Lee, Alicia Garza, Emily Lee, Antonio Díaz, and many others. We were organizers working in communities of color, with young people, immigrant communities, Black communities, and working people on both sides of the Bay— and we were already starting to reach across the divides of our cities.

In some places, elected officials increasingly spoke the language of our campaigns, building on the foundation created by decades of our organizing and by the new local civic engagement collaboratives—the Risings—that we had formed in San Francisco and Oakland.

Still, despite the Bay Area’s reputation as a bastion of progressive politics, it was clear that we had to take our voter organizing to the next level. Between 2000 and 2010, Oakland had lost a quarter of its Black population. Between 1990 and 2011, San Francisco’s Mission District lost 1,400 Latinx households, while white homeownership more than doubled. I knew in the pit of my stomach that the Bay Area’s economic boom was pushing out the poorest people, the people who we had doorknocked with and supported through eviction struggles, who we had laughed and even cried with.

Gentrification was gerrymandering strong, connected, progressive communities of color out to the far reaches of the Bay—or out of the area entirely.

Today, it’s clearer than ever that because of rapidly growing corporate interests and profits in the region, people living in the Bay Area suffer from some of the highest levels of income inequality in the country. From Silicon Valley to outer Contra Costa County, the issues we face continue to be larger than one city.

In order for the solutions we have built on a neighborhood and municipal scale to have the impact we envisioned, we must center the agendas of working people of color in Bay Area government and coordinate our organizing across city borders.

In 2011, we were sketching the blueprints of a process that would lead us to this new kind of movement infrastructure, drawing lines to connect the networks and resources we had built, imagining how much more we could do together. And on that crisp November day, something clicked for me. As we marched among thousands who poured into the streets, I saw our whole community—from our children’s teachers to our neighborhood grocer to elected officials—marching alongside the members of our organizations from around the Bay. I saw our neighbors supporting our members’ demands and their vision.

Spontaneously, a group from our march began to climb scaffolding at the Port. As we helped each other up in a rush of adrenaline and draped painted banners across the beams for everyone to see, we glimpsed our future. The people can rise to the top of the structures we ourselves built, and we are ready to use our tools to build the world we wish to live in. We in the Bay Area are ready to grow into our potential as a home for radical grassroots innovation. 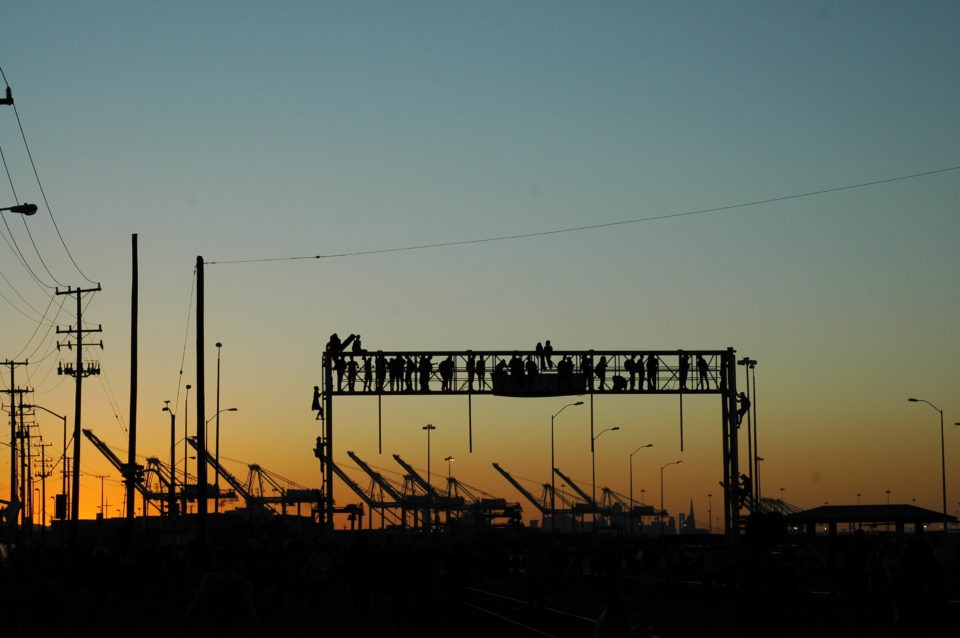 The sunset burned the silhouettes into our memory.

Whenever I see that image on Bay Rising’s logo, I think of that electrifying moment of mass mobilization. Let it be a reminder of the scale we must climb to, the scaffolding we must build in order to make a truly transformative change in our society, and the masses of people it will take to get us there.

When we come together, we can transform the politics of governance, from the bottom up. We are the architects of our own future.

María Poblet is Deputy Director of the Grassroots Policy Project. She is the former Executive Director of Causa Justa :: Just Cause, and a co-founder of Bay Rising.